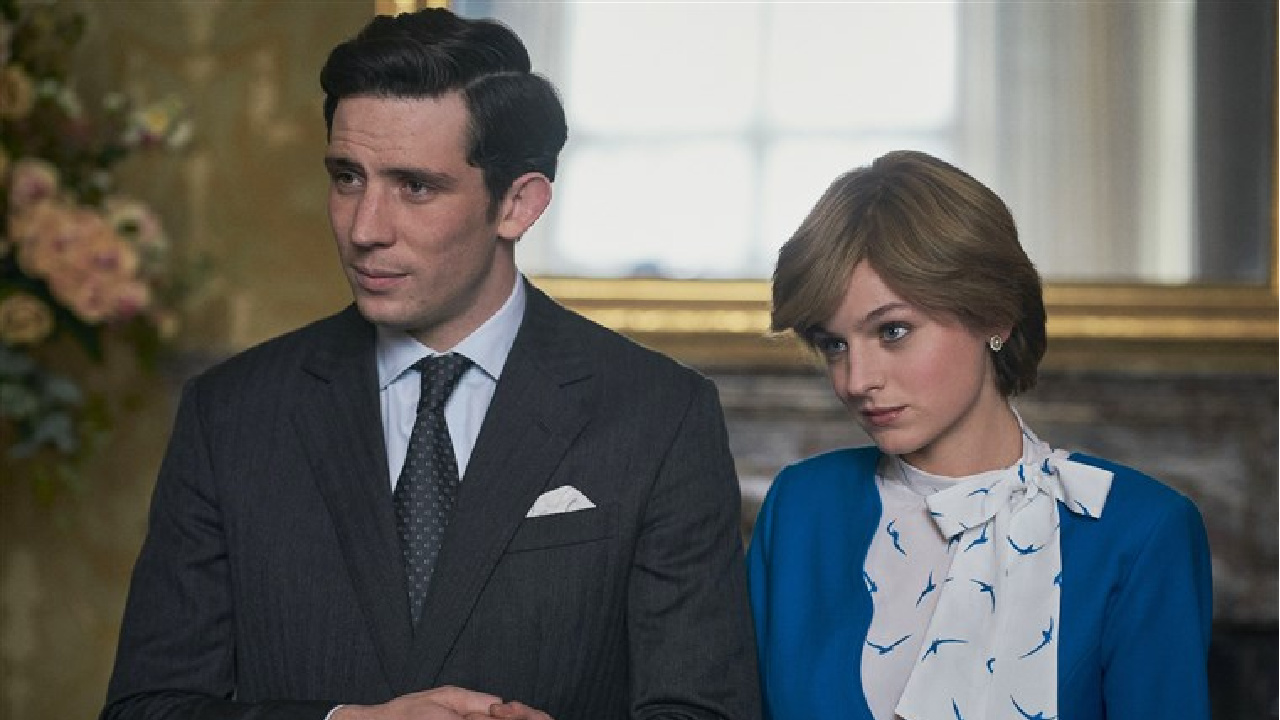 If you’re expecting a baby and a fan of the popular Netflix series ‘The Crown’ you might be thinking about choosing a baby name inspired the show.

In this list you will find the names of the characters in the series, details of who they were portraying and the meaning each name has.

Anthony – Anthony Eden was a British Conservative politician who served as Prime Minister of the United Kingdom from 1955 to 1957. He also served as Foreign Secretary from 1951 to 1954. Anthony is a masculine given name that comes from the Ancient Roman clan name Antonius, which may itself have originally been an Etruscan name. The meaning of Anthony is “great one” or “that which is priceless”.

Margaret – Princess Margaret was Queen Elizabeth’s younger sister. Margaret was a lively, talented woman who was more often than not the centre of attention, and whose energy influenced everything she did. Margaret is a feminine given name that comes from Germanic elements meaning “pearl” and “war”. Margaret is derived from the Old German Margaretha, which in turn came from Greek μαργαρέτα (margarétha), meaning “pearl”, which may have referred to the precious pearl offered by Aphrodite to Hippolytus when he spurned her.

Winston – Sir Winston Churchill was a Prime Minister of the United Kingdom for two terms. He was first appointed when King George VI was in power, and then again when Queen Elizabeth II took the throne. Winston is a masculine given name that comes from Old English, meaning “joyful stone”.

Wallis – Wallis Simpson is known for being the woman for which King Edward VIII abdicated his crown. She made somewhat of a name for herself due to both her fashion sense and her past, having been divorced twice before her marriage into royal family. Wallis is the feminine form of Wallace, a surname that was derived from Old English words meaning “Welshman”.

Peter – Peter Townsend is a former Air Force Group Captain who battled in World War 2. He works as an assistant to King George VI and is married with two children, but he still has an extramarital relationship with Princess Margaret for whom he eventually divorces. Peter is a masculine given name that comes from the Greek word “Petros” meaning “rock” or “stone”.

Clemmie (Clementine) – Clemmie was Winston Churchill’s wife and life peer. The Prime Minister was a difficult person to deal with, and few people were willing to stand up against him and confront him on his mistakes. However, Clementine could- and would do so readily. Clemmie is derived from the Latin word “clementia” which means “mercy” or “clemency”.

Philip – Prince Philip of Greece and Denmark gave up his title, converted to the Church of England from Greek Orthodoxy, and became a British citizen in order to marry the Princess Elizabeth. He was a constant and loyal companion to the Queen for 73 years, serving the nation diligently by her side. Philip is a masculine given name that comes from the Greek Philippos, which means “lover of horses”.

Mary – Queen Mary was the wife of George V, the British monarch who reigned from 1910 to 1936. It’s believed that Queen Mary was a good, kind mother despite her strict, formal appearance. Mary is a feminine given name that comes from the Hebrew Miryam, which means “beloved of God”. It was derived from the Egyptian word mariama, which also meant “beloved”.

Tommy – Sir Alan “Tommy” Lascelles was King George VI’s personal secretary, and he served Queen Elizabeth II as well in the same position. Tommy is a diminutive form of Thomas, which was originally a nickname meaning “twin” and derived from the Aramaic word “Toma”.

Elizabeth – The Queen of England is the Head of the United Kingdom and the Commonwealth. On becoming the Queen in 1952, Elizabeth ascended the throne at the incredibly young age of 25 following her father’s sudden death. The name Elizabeth means “consecrated to God” or “my God is an oath.” It comes from the Hebrew Elisheba, which in turn comes from Eliyahu meaning “my God is an oath” or “God has sworn.”

Martin – Lieutenant-Colonel Martin Charteris served as an officer in the army of Britain and was also a personal courtier to the Queen. He was a personable companion and an astute judge of character, who occasionally did things he probably shouldn’t have. The name Martin has Latin roots from the name Martinus, which itself is based off the Roman God of War, Mars. The name typically means “of Mars,” or “warlike” as referring to the god.

Dorothy – Lady Dorothy Evelyn Macmillan, the third daughter of Victor Cavendish, Duke of Devonshire, was a British socialite who was married to former UK Prime Minister Harold Macmillan. The name Dorothy means “the gift of God” and comes from the Greek word doron, meaning “gift”.

George – King George VI was King of the United Kingdom from 1936 to 1952. Prince Albert became King of England on 11 December 1936 when his brother, Edward VII, abdicated in order to marry Wallis Simpson. George is derived from the Greek word Georgios, carrying a meaning of “farmer of the earth”.

Clarissa – Anne Clarissa Eden is the widow of former British Prime Minister Anthony Eden. She married Eden in 1952, becoming Lady Eden and the Countess of Avon throughout their marriage. Clarissa was also the niece of Winston Churchill. Clarissa is a relatively common female given name that can either be a variant form of Clara or Clarice. Clarissa derives from the Latin clarus meaning “clear” and “bright”.

Edward – Edward, Duke of Windsor, was the elder brother of George VI. King Edward VIII served for just 10 months from January to December 1936 before abdicating to marry Wallis, who was considered to be an unacceptable match. Edward is derived from a Germanic word meaning “rich guard” and “prosperous”.

Anne – The only daughter of Queen Elizabeth II, Princess Anne is the second eldest among her siblings. Anne has always been shown to be independent, headstrong, and passionate. The meaning of Anne is “grace”. It comes from the Hebrew name Hannah, which means “grace” or “merciful.”

Charles – Charles is the official Heir to the British Throne as he is the eldest child of Queen Elizabeth II. Prince Charles is the oldest and longest-serving heir apparent in British history. He has been Duke of Cornwall and Duke of Rothesay since 1952. The name Charles is a masculine given name which is derived from the Old French word “Carles”, or the Latin word “Carolus”. The English form of this name comes from the Germanic word “Karl” meaning “free man”.

Cecile – Princess Cecile of Greek and Denmark was an elder sister of Prince Philip, Duke of Edinburgh. The name Cecile means “blind” and comes from the Latin word “caecus”, which refers to “someone who is blind”.

Henry – Prince Henry was the third son of King George V and Queen Mary. From 1945-1947. he served as the Governor General of Australia. By doing so, he was the only member of the British royal family to ever hold this position. The name Henry is derived from the Germanic word “Heimirich” which means “home ruler”. It was originally a child’s first name that became popular in England during the 13th century, following the reign of King Henry III.

Alice – Born Lady Alice Christabel Montagu Douglas Scott, Princess Alice became a princess by marriage to Prince Henry, Duke of Gloucester. As the sister-in-law to George VI, she was also by marriage Queen Elizabeth’s aunt. Alice is a feminine given name which comes from the Old French “Aisselle” or “Alix”, which means “defender” or “helper”. It also comes from the Latin word “Adalecta”, which has a meaning of “kind and gentle.”

Diana – Diana, Princess of Wales (born Diana Frances Spencer) became part of the British Royal Family when she married Charles the Prince of Wales. Diana died on 31st August 1997 in a car crash in Paris and was the mother of Prince William and Prince Harry. The name Diana is often depicted as a huntress and has the meaning ‘Divine’.

Harry – Prince Harry the Duke of Sussex is the Son of Diana, Princess of Wales and Charles, Prince of Wales and is sixth in line of succession to the British throne. The name Harry is of Old German origin and means ‘home ruler’.

William –  Prince William the Duke of Cambridge is the Son of Diana, Princess of Wales and Charles, Prince of Wales and is second in line of succession to the British throne. The name William is of Old German origin but became popular in England in 1066 after the Norman Conquest. The name William means ‘Strong-willed warrior’ which is fitting for a future king.